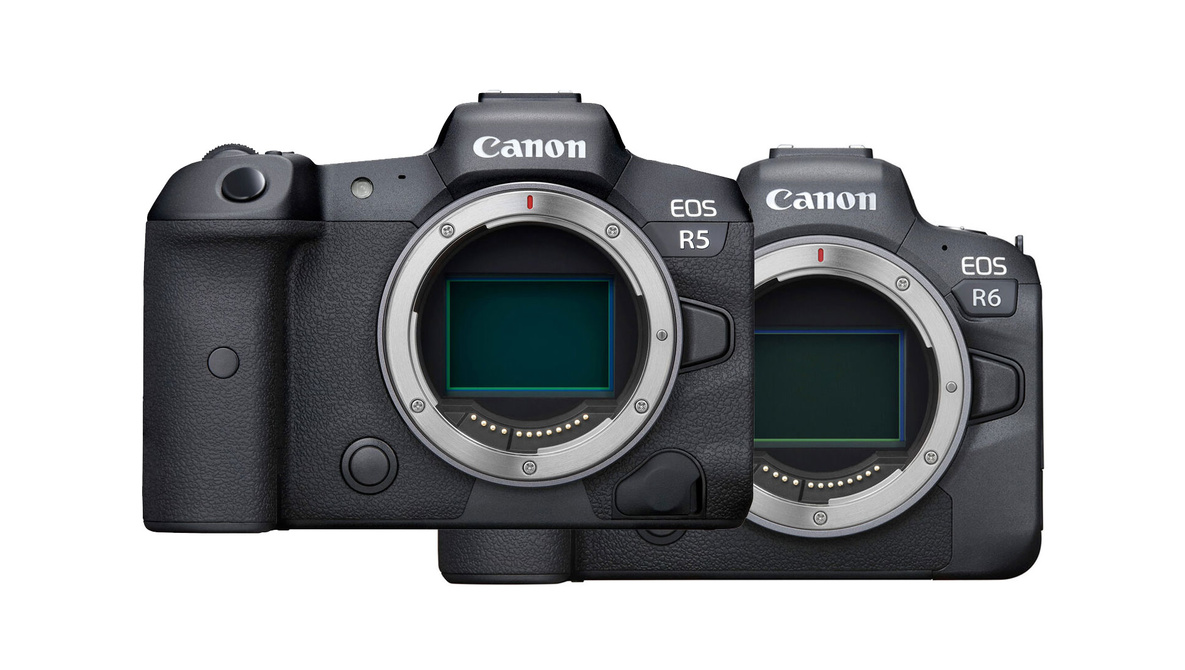 Canon has just announced their brand new mirrorless cameras, the EOS R5 and EOS R6 (09.07.2020), and the R5 especially seems to blur the lines between mirrorless and cinema quality thanks to its huge specs.

The EOS R6 shoots stills at 20 MP, whereas the EOS R5 captures 45 MP images. They both feature the same Dual Pixel CMOS AF sensor, so that means the EOS R6 has the upper hand when it comes to lower noise due to the comparatively lower photo sites. However, the new DIGIC X processor is set to quell any issues with noise anyway, as it’s reported to handle this well.

The EOS R6 and EOS R5 see in-body image stabilization for the first time in a Canon mirrorless camera, which offers up to 5 stops of stabilization. When combined with a compatible RF lens this can go up to an incredible 8 stops of IS, meaning handheld shooting, even in low light, is possible more so now than it ever was.

If you’re keen to get the best video resolution, the EOS R5 is for you. It’s capable of shooting up to 8K 12 bit DCI raw video footage at 30 fps. Because of its uncropped movie recording, it can also capture 4K oversampled, meaning even better definition than the EOS R6’s 4K cropped UHD video capture. The EOS R5 also has many more recording options, including 4K at 120 fps and drops all the way down to 1080p with a vast array of different frame rates. Both cameras shoot C-Log, HLG, and PQ HDR as well.

The EOS R6 has a pretty decent viewfinder at 0.5″ with 3.69 million dots OLED running at a reported 60 fps, but the EOS R5 again improves on that by using an identically sized 0.5″ EVF but at 5.76 million dots OLED running at 120 fps. That means the EOS R5 has the most advanced EVF of any Canon, closer to an optical viewfinder than any other Canon EVF.The vari-angle touchscreens are similarly different, with the EOS R6 packing a 3.0″ 1.6 million dot screen, and the EOS R5 going sightly bigger with a 3.2″ 2.1 million dot screen instead, making things that little bit better to see on the rear screen.

The EOS R5 does have a top status LCD screen, whereas the EOS R6 does not. This shouldn’t be much of an issue for casual users, because the EVF and rear vari-angle touchscreen both display the camera settings while shooting, but it’s a little disappointing from an aesthetic point of view. Understandably, this is probably due to cost and button placement rather than anything else.

Both cameras connect via Wi-Fi and Bluetooth, but the EOS R5 has a slight upgrade in that it can connect via 2.4GHz and 5GHz Wi-Fi for better connections when interference is an issue. Another big announcement by Canon is their new automatic connectivity to Google Photos and the Adobe Creative Cloud.

Canon has realized that workflow is as important as the shooting itself. That’s why they’ve unveiled the new Auto Transfer Function. Canon has teamed up with two of the biggest cloud markets, Adobe and Google, to work on this cloud platform system. Now Canon EOS R5 and R6 users can automatically transfer the images from the camera and up to the cloud and share with one of these two platforms.

The two cameras have two card slots each. The EOS R6 has two fast SD UHS-II slots, whereas the EOS R5 features one SD UHS-II slot, and a CFexpress card slot. The CFexpress cards can write at speeds up to 1400 MB/s compared with the 300 MB/s top speeds of the SD UHS-II, and the reason for Canon’s inclusion of this slot in the EOS R5 is obvious: something is needed to capture 45 MP stills at 20 fps and 8K 12 bit DCI raw video footage without failing spectacularly.